A lineup of large-capacity Liquid to Liquid Thermal Shock Chambers

Three large-capacity chambers have been added to the TSB series of Liquid to Liquid Thermal Shock Chambers.
Compared to the air to air thermal shock type, the liquid to liquid thermal shock type applies higher stress on the specimen, and shortens a test time.
In addition, the load capacity has been increased in accordance with the larger specimen basket, thereby enabling support of large specimens.

Various mechanisms to greatly reduce consumption of brine
To reduce brine consumption, the airtightness of the test area has been increased to prevent vapor leaks and evaporation has been prevented.There are also other mechanisms to recycle brine after separating water by the filter for.

Smooth specimen transfer
An air cylinder reduces vibration to the specimen. A new drivel mechanism, when inserting the specimen into the water bath, is being used to control excess stress to the specimen during transferred between the hot chamber and cold chamber. 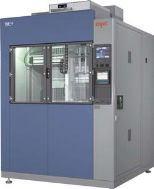 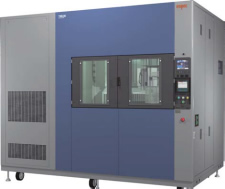